Article published in the journal Inside Dentistry | October 2012, Volume 8, Issue 10

Implants: this second of a two-part series describes the use of CBCT cross-sectional imaging to acquire buccolingual information needed for accurate implant placement.

In this second of a two-part discussion of the 3D Click Guide® (Idondivi, Inc.) for model-based guided implant placement, the author describes the use of cone beamcomputer tomography (CBCT) cross-sectional imaging as an alternative to bone sounding to acquire the buccolingual information needed for accurate implant placement.

In spiral.computed tomography (CT), an X-ray beam encircles the patient, who is slowly moved through it to capture a series of slices. With CBCT, a single cone that rotates around the patient is projected, and the data are captured on an opposing screen and.computed into a 3-dimensional (3-D) data set. Due to their differences, there are distinct positives and negatives to each of these technologies. Compared to spiral CT, CBCT needs less ionizing radiation, is less affected by metal artifacts, has a smaller footprint, and costs much less to purchase and operate; however, CBCT-generated images are less defined, are prone to beam hardening, cannot be used for Hounsfield density measurements, and are volumetrically not as precise as those from spiral CT.1-8 Yet the enthusiastic adoption of CBCT in the dental profession suggests that clinicians accept its negatives and embrace its positives. Very few dentists have had formal education in the application of this new technology, and consequently tend to rely heavily on manufacturer-supplied information. With that came an enthusiastic proclamation of necessity and words like “standard of care.” It took an article in the New York Times9 to remind the profession of the disadvantages as well as the advantages. Since then, it seems that there is a more balanced view. New technology needs time to prove that it indeed does improve the outcome of the delivered care enough to warrant the additional cost in money, time, and radiation.

Of course, developments in other fields might have an effect on the desirability of employing CBCT. For example, if there is 15 mm to the mandibular canal and the clinician wants to place a 13-mm implant, then it is highly likely that cross-sectional imaging does give the needed peace of mind. While in the past, 13 mm was the standard implant length, most implant.companies today report that a majority of the implants they sell now are 10 mm to 11.5 mm in length. An ever-increasing body of literature is making the point that even 8.5-mm implants work as well as the large ones.10-18 Some reports even describe implants as short as 4 mm functioning successfully.19 The reader can appreciate the clinician who, with that 15 mm to the mandibular canal, now wishes to place a short implant but may find that the safety margin toward the canal is so generous that cross-sectional imaging with CBCT does not add appreciable peace of mind as it did in the example of the 13-mm implant. Only the passage of time will show whether or not it improves the outcome. Clearly, technology will adapt to the needs of the profession, the profession will adapt to advances in technology, and third-party insurers will carefully consider whether such technology makes good use of their insurance dollars.

The purpose of this article is to describe the utilization of cross-sectional CBCT imaging specifically with the new 3D Click Guide, an economical, in-office, fully restrictive surgical guide. As was explained in Part 1 of this series, the 3D Click Guide is indicated for cases requiring one to two implants — ie, partially edentulous situations where the guide is supported by the remaining dentition; the clinical situation can be bounded by teeth or free ended.

When planning the placement of a dental implant, it is imperative to think about it as an object in space, as it requires consideration of the x, y, and z planes — the mesiodistal, buccolingual, and apico-coronal. The mesiodistal relationship of the coronal parts of the teeth is readily available from a dental cast. The mesiodistal information hidden from the eye can be derived from a conventional periapical radiograph. The apico-coronal information can also be derived from a periapical radiograph, but will need some help to be reliable enough to be used for measurements. The position of the top of the implant, the implant shoulder, is determined by the buccal margin of the gingiva. As current thinking put the shoulder 2 mm to 3 mm below this margin, no X-rays are needed here. 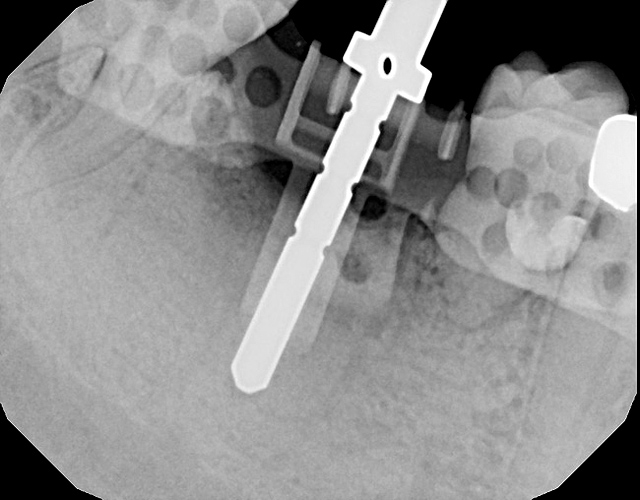 Figure 1. An indicator pin in an 8.5-mm osteotomy, showing about 4 mm to the canal on the radiograph. 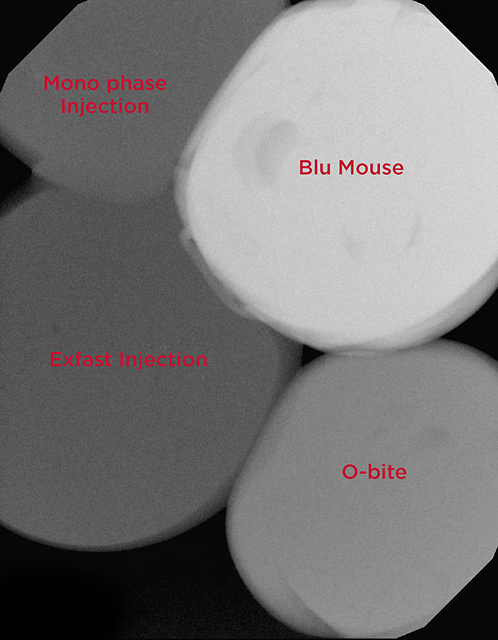 Determining the correct length of the implant depends on the philosophy of the treating dentist. Periapical images can easily be elongated or shortened. An instrument of known length, such as an indicator pin, can be placed in the intentionally short initial osteotomy when the radiograph is exposed (Figure 1). Because the deformation is uniform, a precise indication of length can be deduced. Again, if the plan is to use a short implant, less information is needed, and therefore there is less to image. 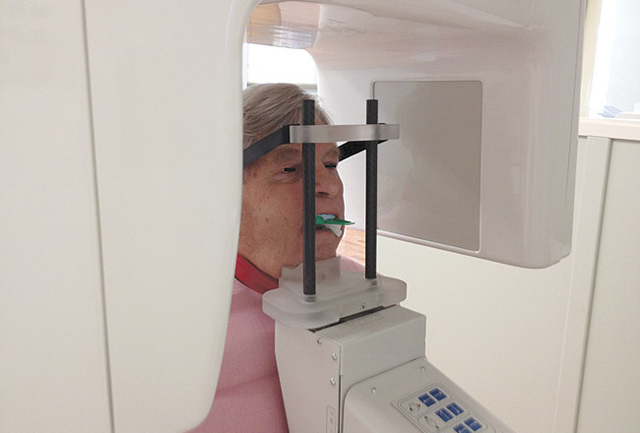 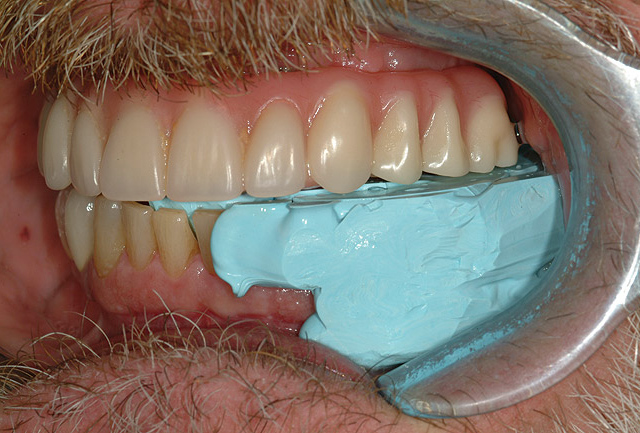 Next to discuss is the buccolingual plane. In part 1, bone sounding was explained as the technique of choice for 95% of the one- and two-implant cases treated by the author. The remaining 5% could not be treated based on bone sounding and periapical information alone, because there was not enough information to safely perform an osteotomy. In cases with advanced bone resorption, there is either not a sufficient amount of the bony crest available to impress — even with the previously described technique of overextended VPS impression, or the mandibular canal and the mental foramen are not visible on periapical X-rays even after taking a few from different angles. Taking a CBCT is the logical decision. The surgeon planning a simultaneous sinus lift who feels the need to acquire the information can take a CBCT. However, in consideration of the time, cost, and radiation involved, CBCT should be taken only when clearly necessary.20,21 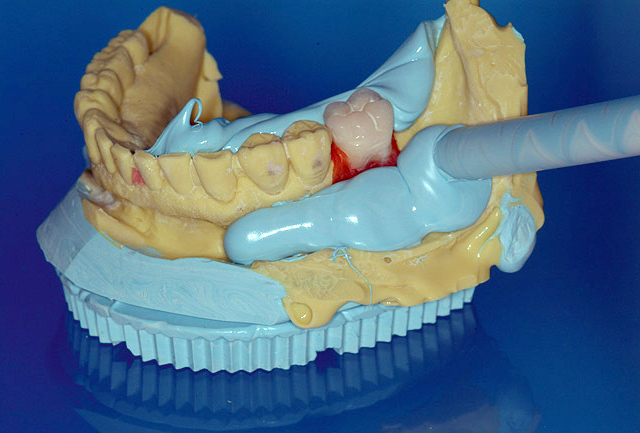 Figure 5. Fabrication of a partial VPS impression on the master cast. Note that the denture tooth can be used to indicate the desired prosthetic outcome. Adding barium sulfate to acrylic will allow visualization on radiographs.

A CBCT study shows hard tissues and the shadow of soft tissues as long as they are surrounded by hard tissue. The pulpal tissue of the teeth is not visible, but the outline of the pulp chamber is visible. The mandibular nerve is not visible, but the cortical bone surrounding it does appear on the CBCT, making it possible to deduce where the mandibular nerve is expected to be. The proposed visualization technique allows very strong contrast to create a negative, much like the just-discussed image of the mandibular nerve. The concept is rather simple; VPS impression material can be radiopaque, but not all materials are radiopaque to the same extent, and some are not radiopaque at all (Figure 2). The patient wears a VPS impression during the CBCT exposure (Figures 3, 4). This can be the actual impression, or a dedicated impression made from a diagnostic cast (Figure 5). This simple technique shows a very distinct space, which is visible between the VPS material and the bone (Figures 6, 7). For the purpose of the 3D Click Guide fabrication, this space would otherwise be measured with the bone-sounding technique, as discussed in Part 1 of this series. Because the surface of the VPS impression visible in the CBCT image is exactly similar to the surface of the cast, the two can be exactly superimposed. Within the CBCT software, simple measurements can be made. Those measurements are made at the same locations as those used when bone sounding. Those measurements are then transferred to the cast. Additional information — eg, location of the mandibular canal — can be extrapolated and drawn as needed (Figures 8, 9).

An 80-year-old woman, who presented with a missing lower molar, requested an implant-supported replacement. Advanced periodontal bone loss at site No. 19 resulted in considerable resorption of the alveolar ridge after healing. Although simple bone sounding is the preferred data-gathering technique for the author, in this case, there was insufficient information available to safely perform an osteotomy. The decision was made to gather additional information with a CBCT study. 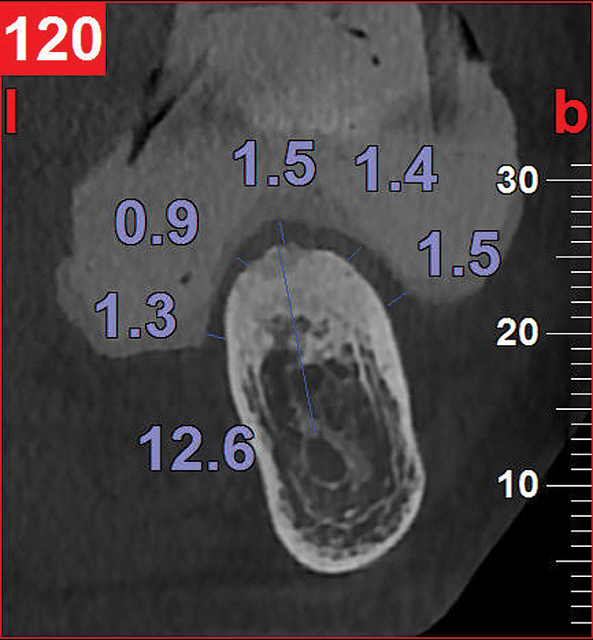 The cast was sectioned 4 mm distal of tooth No. 20. The data from the corresponding cross-sectional cut were transferred to the cast. The ideal buccolingual axis was drawn onto the cast, based on a screw access hole in the central fossa of the future crown. A small hole was drilled at the desired location of the shoulder of the implant. The pin of the Bucco Lingual Positioner (BLP) was placed in the hole, and the central groove of the BLP was lined up with the drawn implant axis. A drop of fast-setting cyano-acrylate glue was applied to lock the BLP in place (Figure 11). The opposing part of the cast was adjusted and the cast was reassembled into the Accu-trac tray. At this point, the buccolingual axis and the top of the implant were irreversibly set, and the mesiodistal could be determined without the risk of making inadvertent changes in the buccolingual plane. The correction slot in the crossbar of the wing assembly fits snugly over the top of the BLP, allowing mesiodistal rotation and mesiodistal translation (Figure 12). Once the correct mesiodistal position was selected, the wings were irreversibly connected to the vacuformed carrier by means of ortho-acrylic (Orthoresin, DENTSPLY International); then the cross-sectional bar was removed, allowing placement of a rotation block. The surgical guide was placed in the mouth and a periapical radiograph was exposed (Figure 13). Note that if the buccal and lingual wings overlap and appear to be one, the radiograph has been taken exactly perpendicular to the ridge, allowing a decision to be made because the image is of acceptable diagnostic quality. In this case, the trajectory was as desired, and the 0º  rotation block was selected, as there was no need for rotation adjustments by means of the 3º or 7º  rotation blocks (Figure 14). The surgical guide was sterilized in a cold sterilizing solution and the surgery was performed per the manufacturer’s drilling protocol. A 8.5-mm x 4.3-mm implant (NobelActive™ 4.3 x 10 mm, Nobel Biocare) was placed as planned (Figure 15).

Figure 13. The surgical guide is placed intraorally, snaps over the height of contour, and is very stable without the need to hold it in place as with mostcomputer-generated guides.

Three-dimensional implant placement is driven by an international peer-established knowledge base of criteria. The clinical execution in a freehand or limited guided manner is still highly dependent on individual operator skill. Fully restrictive surgical guides allow operators with less experience to place implants expertly, and they enable experienced clinicians to do so more expediently. Computer-generated surgical guides are less economical for smaller cases; hence the development of an economical dedicated analog surgical guide for one- and two-implant cases. 3D Click Guide is an in-office, model-based surgical concept using data from bone sounding measurements or, if desired, CBCT.