Typically, the cause of such phenomena is the combination of objective (complicate anatomy of root canal system (RCS)) and subjectivefactors (lack of necessary knowledge, skills, equipment and so on). According to A. Castellucci «90 percents of endodontic treatment failures occur because of incomplete cleaning and obturation of RCS» (A. Casttellucci, 2006) (fig. 1).

It was illustrated in the thesis of J. West, 1974: «…100 percents of endodontically-treated teeth extracted for periodontal reasons had at least one not obturated port from the RCS to the periodont» (fig. 2). 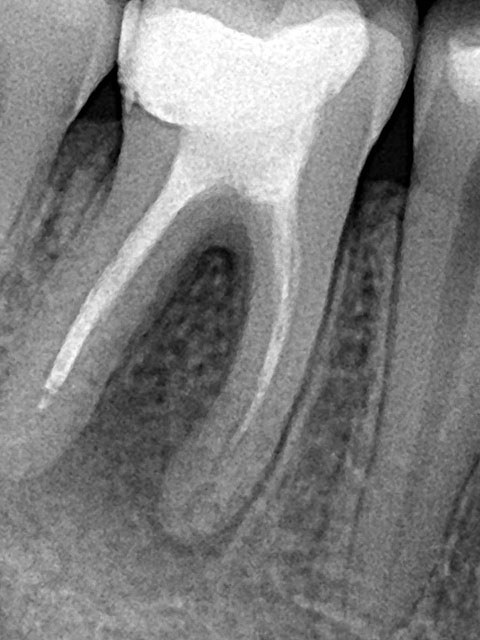 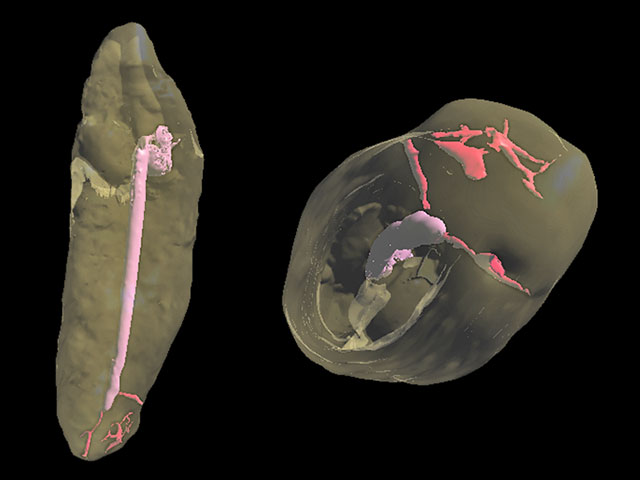 As evidenced by the above, thorough diagnostic examination (including a three-dimensional analysis of the original situation) becomes of particular importance.

The previous doctor wasn’t able to path the root canal of 44 tooth (his conclusion was: obliteration). Root canal lumen in apical one half isn’t observed on the preoperative radiograph.

It’s hard to believe that the root canal could begin obliterate in direction from apex to crown. Let’s examine carefully the apical third: 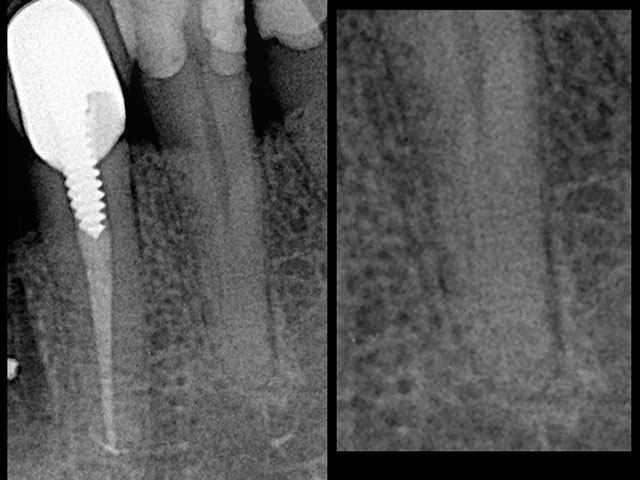 Fig. 5 While inspecting the periodontal slot on the both sides of the root we find superposition of 2 roots and overlapping layers of dentin are not allowed to see the root canals lumens 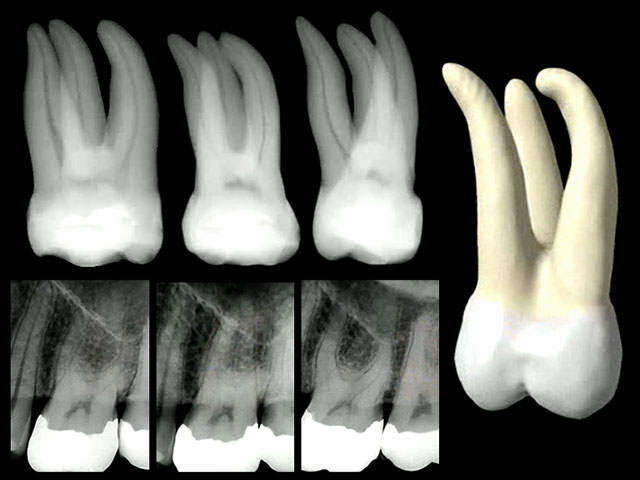 The success of endodontic treatment strongly depends on the equipment and tools used by dentist. Application of operating microscope helps «to see what you are doing and to do what you are seeing». 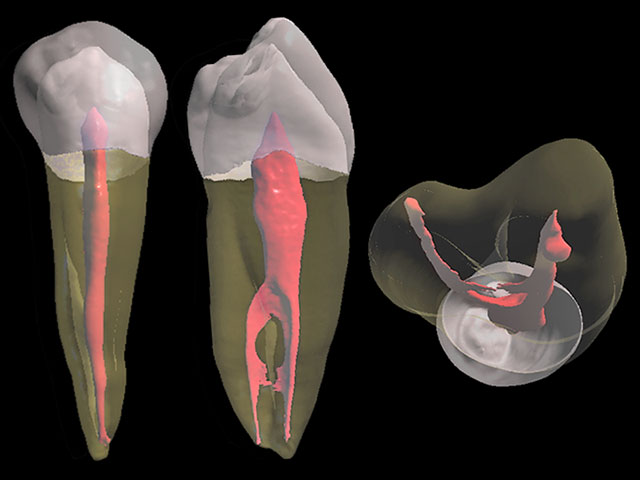 Radiographic control of the obturation

Root canals were obturated in the Schilder technique of vertical compaction of warm gutta-percha. 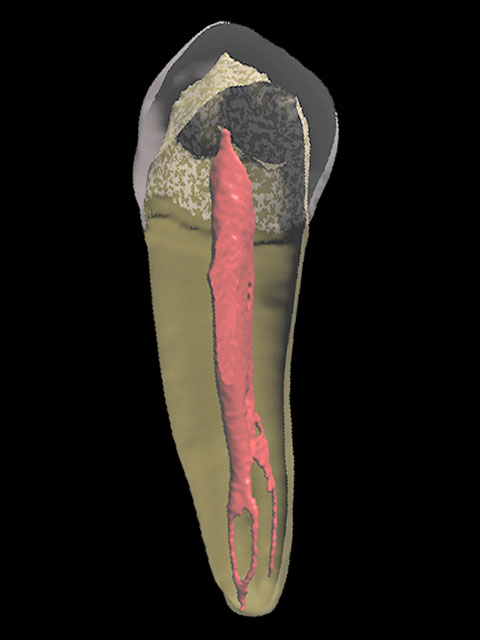 Coronal part of 44 tooth was restored with the help of fiberglass point ENA-Post (HFO) and core material ENA-Cem (fig. 11-12), and was prepared for metal ceramic crown (fig. 13-14).

Laboratory and fixation of crown 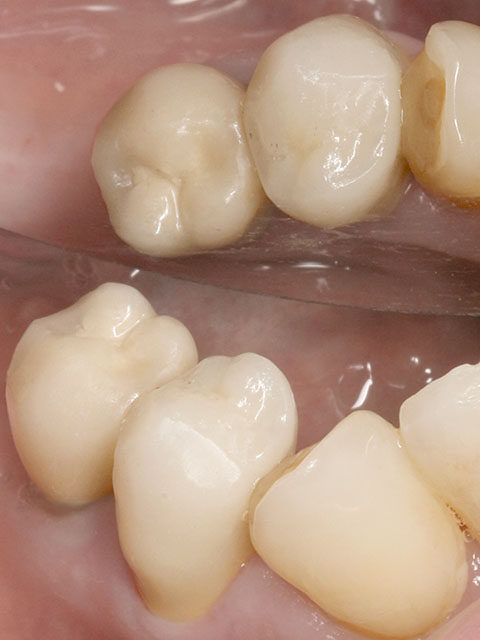 The reason for treatment was the patient intention to make permanent metal ceramic crowns on 16 and 17 teeth (before the visit patient used plastic crowns). There were some complains of discomfort when chewing or touching the projection of MB apex (fig. 17-18). Anamnesis: 16 tooth had been endodontically retreated 2 years ago and obturated with Thermafil obturators at the same moment. Core was built with carbon post fixed in palatal root and composite core material. Tooth was prepared for metal ceramic crown.

Since there is no clinic and the restoration is ok, the decision about retreatment of 16 tooth should be made after careful investigation of the lucense area on the X-ray. For this purpose it’s useful either to make several images in different projections or to carry out 3D diagnostics with the help of CT (fig. 19-24): 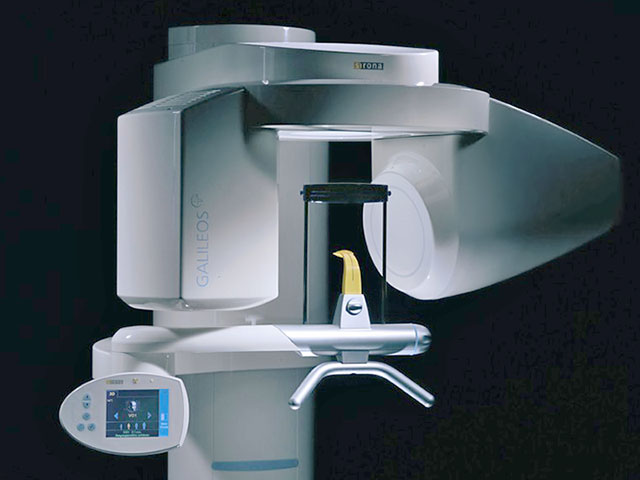 Analysis of enlarged fragments of sagital slices: • Lesion (area of decrease density) around MB root apex; • The additional canal lumen in the coronal and medial thirds of MB root; • Unfilled parts of canals in apical thirds of buccal canals.

The decision about the second retreatment of 16 tooth has been made.

The access to MB1 and DB was made. • Cores of Thermafil obturators were removed mechanically. • The gutta-percha from RC walls and irregularities was removed by dissolving in CHCl3 (chloroform) (fig. 25-28)

Then, mesial groove was inspected with Micro-Opener instrument in palatal direction. After the withdrawal of dentin layer from medial wall of access MB2 orifice was found (fig. 29-32).

Buccal canals were cleaned and shaped with Protaper instruments with irrigation of 5 percent solution of NaOCl, patency of apical foramens was maintained (fig. 33-35).

Unfortunately DB was not passed completely because of the ledge.

RC were obturated in the Schilder technique of vertical compaction of warm gutta-percha: 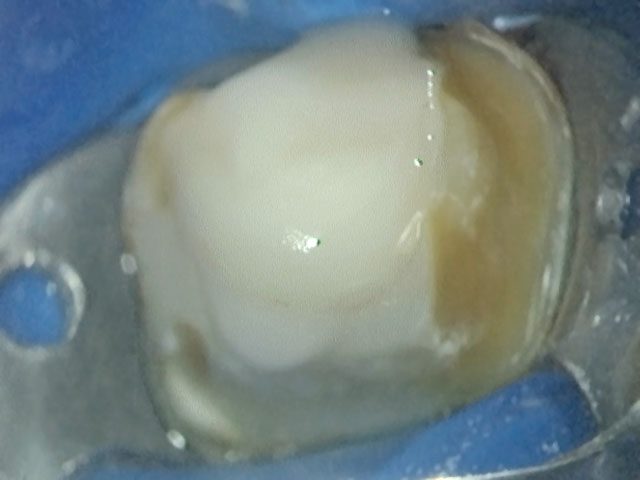 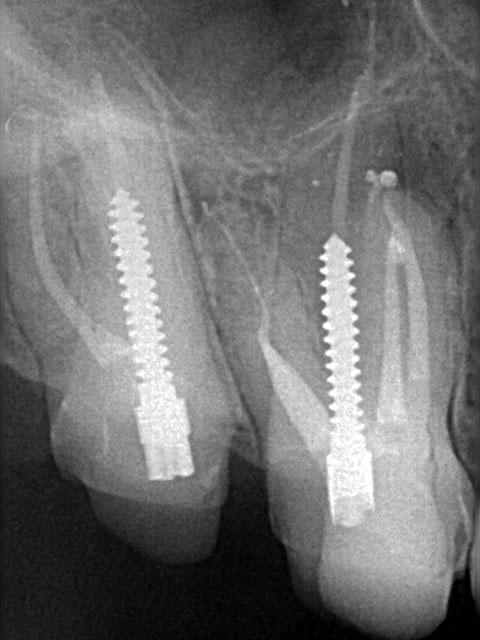 Fig. 42 Postoperative radiograph of 16 tooth: • mesial canals are 3D obturated, each canal has its own apical foramen; • distal canal demonstrates filling down the ledge (it must be sealer) 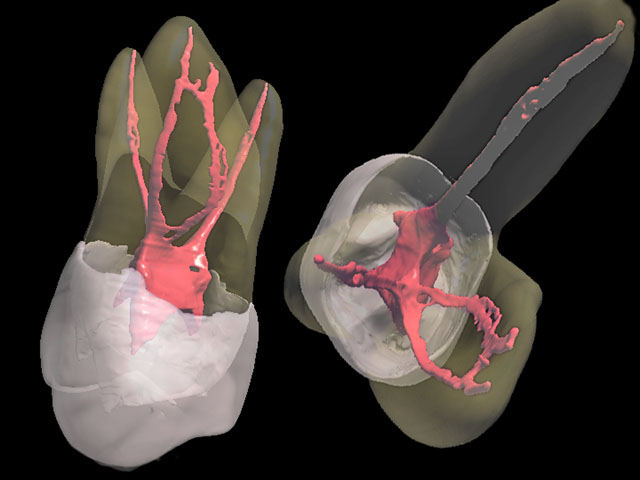 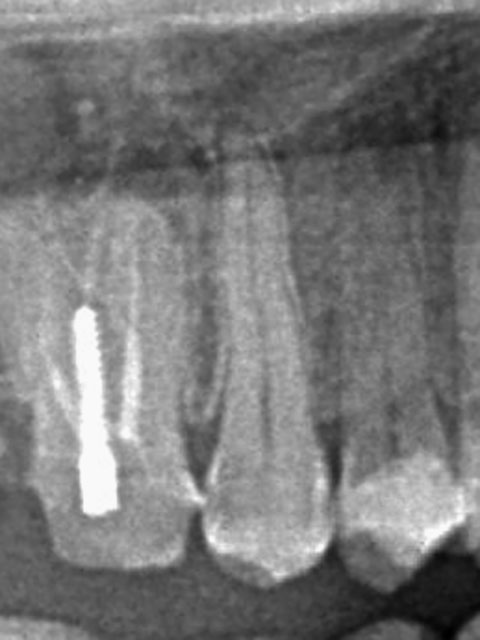 The need for endo-treatment in the case of extensive caries lesion of tooth can be solved by diagnostic studying with CT (fig. 47-50): 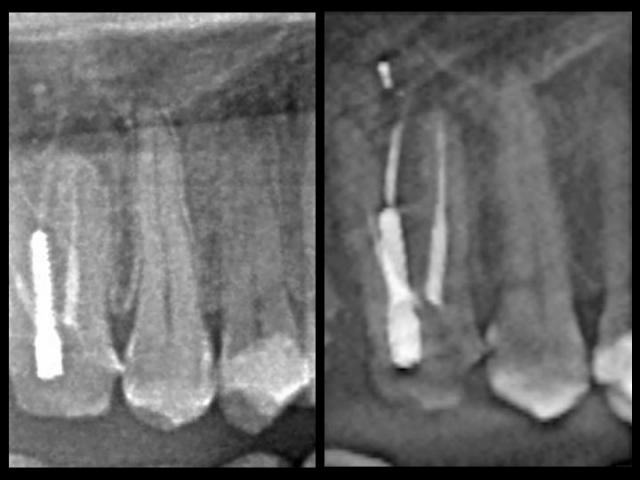 Fig. 47 Fragment of panoramic X-ray and sagital section of 15 tooth

Removal of softened dentin (fig. 51-53). • Preparation of gingival walls with ultrasonic instruments (fig. 54). • Pretreatment – the restoration of aproximal walls of the tooth (fig. 55-56).

CT analysis. Horizontal slices at the orifice (one slit-like canal) and the (2 canals) levels (fig. 57-60). • RCT. RC of 15 tooth were cleaned and shaped with ultrasonic and NiTi instruments (fig. 61).

The possibility of RC fusion affects on obturation approach.

The master cone is fitted to one of root canals and the file #10 is inserted into the other canal on full working length (fig. 62 a-b).

During the washing of one of the RC the bubbles may appear in the other one: 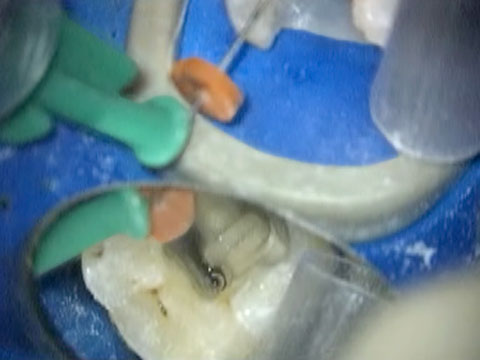 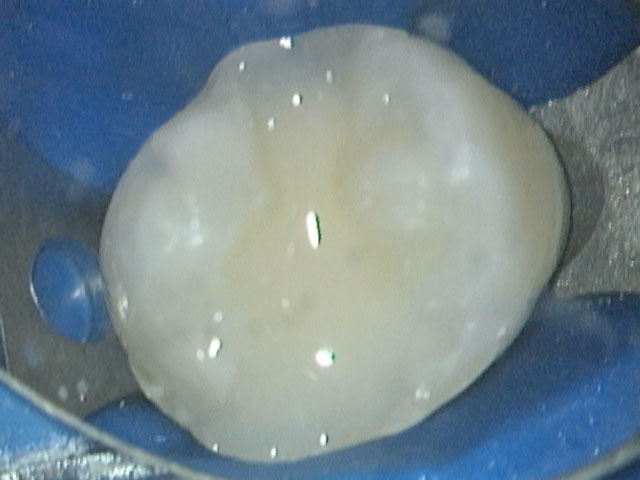 Below (fig. 75-76) there are presented fragments of profile slices, showing fusion (orifice and apical third) and division  third and apex) of 15-th tooth’s RC, as well as an example of similar system from Dental Anatomy & Interactive 3-D Tooth ATLAS (Brown and Herbranson). 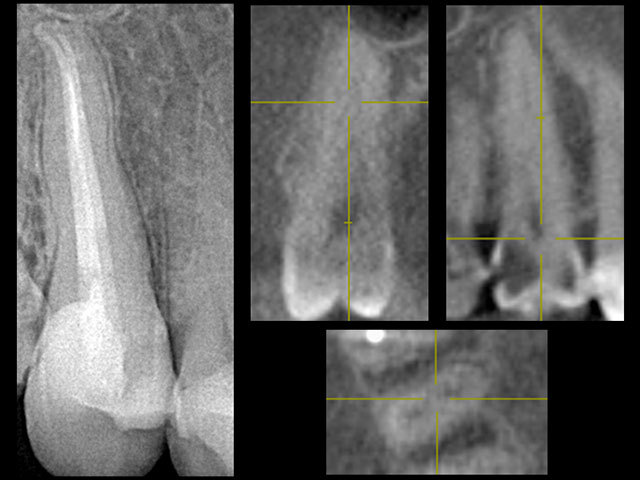 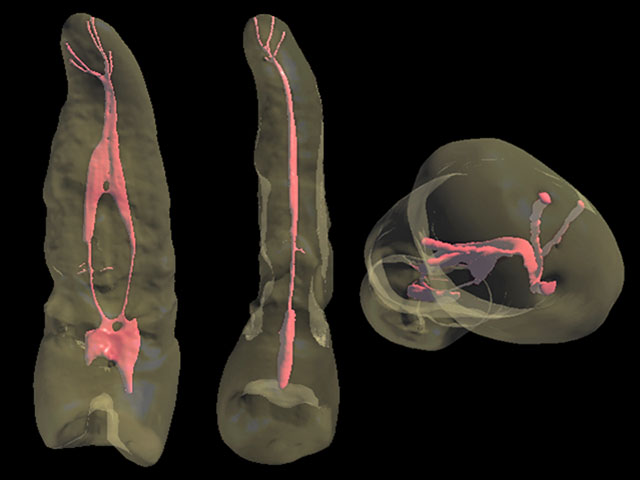