Article published in the journal Inside Dentistry | December 2011, Volume 7, Issue 11

New adhesive allows clinicians to use preferred technique with any indication.

In the anterior, several factors must be considered when doing direct restorative procedures, including technique, material choice, esthetics, and patient expectations. As it is becoming increasingly common for patients to prefer minimally invasive procedures with high esthetics, particular attention must be given to the technique and materials used to ensure that the patient receives a comfortable and attractive restoration that will withstand the test of time.

The adhesive used is a key factor in ensuring a pain-free and durable restoration. Common challenges posed by some adhesive systems are technique-sensitivity and the quality of the bond to the prepared tooth structure. The majority of clinicians are split between their preference for either self-etch or total-etch adhesive products. Although many dentists use multiple adhesives in their practice to obtain the best clinical results for a variety of cases, clinicians will often use techniques that are most compatible with their preferred adhesive. The selective or preferential etching technique is sometimes used as well to bridge the gap between total-etch and self-etch techniques, particularly when bonding must occur to both dentin and enamel surfaces. Unfortunately, with many adhesive systems, bond strength can be compromised using this technique if the dentin is inadvertently etched.1,2

To address these challenges, 3M™ ESPE™ (www.3mespe.com) has introduced a new class of adhesive, Scotchbond™ Universal Adhesive, an all-in-one product that performs successfully in self-etch, total-etch, and preferential-etch modes with both indirect and direct restorations.3 Now, with just one bottle, clinicians have the ability to choose their preferred technique, confident that a high and predictable bond will be achieved.

Scotchbond Universal adhesive was developed from proven 3M bonding technologies, and uses a unique chemistry that incorporates three key components: 3M™ESPE™’s proprietary Vitrebond™ Copolymer, a new monomer, and silane. Together these components contribute to the product’s strong performance and predicable results. According to the manufacturer, the copolymer, in particular, enables more consistent bond performance to dentin under varying moisture levels, allowing for successful bonding, even if saliva or other moisture is present on the tooth surface.

In addition to choosing the right adhesive, the restorative material used must be able to provide the esthetic qualities needed for anterior work. One such material is the recently introduced 3M™ ESPE™ Filtek™ Supreme Ultra Universal Restorative. According to the manufacturer, this material from the Filtek family offers true nanotechnology and exhibits wear resistance similar to enamel. Product benefits include improved handling of translucent shades, excellent polishability and polish retention, and an expanded selection of body shades and improved fluorescence. These qualities allow for the use of the anatomical or multi-layer technique, which produces a life-like restoration with an opacious and chroma-rich dentin color and lighter dentin shade.

An 18-year-old male patient presented with decalcification and interproximal facial and cervical decay after completion of orthodontic treatment (Figure 1). While the decalcification was extensive and could have warranted full restorations, the patient preferred to be treated conservatively and preserve as much of the tooth structure as possible. The stained and infected dentin was removed and care was taken to maintain the unaffected tooth structure (Figure 2). The patient was also prescribed 3M™ ESPE™ Clinpro™ 5000 1.1% Sodium Fluoride Anti-Cavity Toothpaste and treated with 3M™ ESPE™ Vanish™ 5% NaF White Varnish to aid in remineralization of remaining decalcified areas. 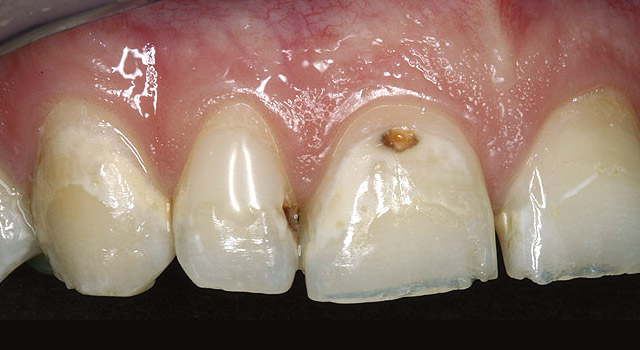 Figure 1. The patient presented with interproximal and cervical decay after orthodontic treatment 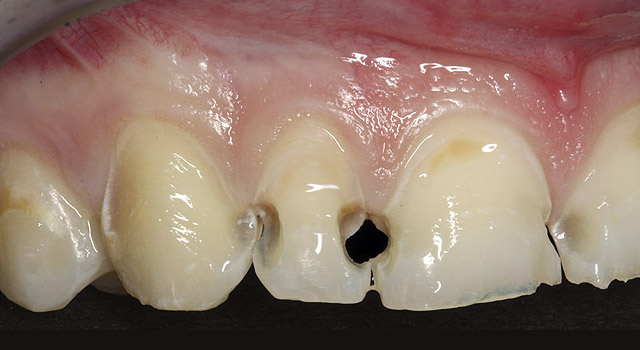 Scotchbond Universal adhesive was chosen for the restoration and used in preferential etching mode to ensure high bond strength and to prevent sensitivity. The teeth were etched using 3M™ ESPE™ Scotchbond™ Universal Etchant for 15 seconds, taking care to avoid dentin (Figure 3). After the etchant was rinsed and the tooth surface was air-dried, Scotchbond Universal adhesive was applied liberally and scrubbed on the surface for 20 seconds to create a good hybridization of the etched areas (Figure 4). Next, the adhesive was air-thinned until all of the carrier was evaporated and there was no longer any visible movement of the adhesive on the primed surfaces. It was then light-cured for 10 seconds. 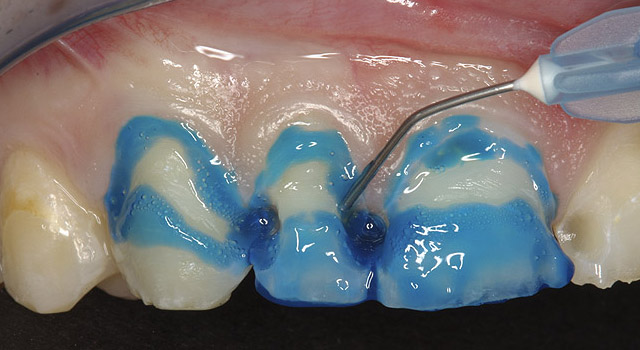 Figure 3. The enamel was preferentially etched with Scotchbond Universal etchant for 15 seconds, avoiding the dentin 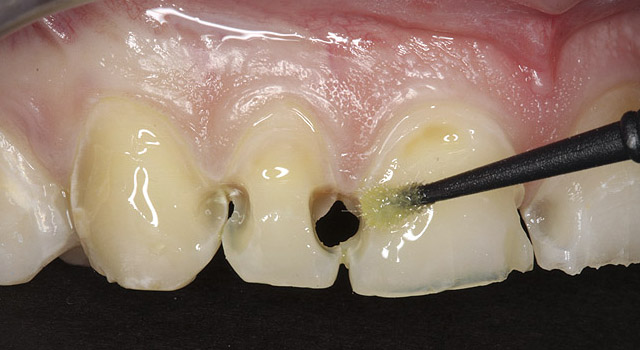 Figure 4. Application of Scotchbond Universal adhesive. Several coats were applied and scrubbed in for 20 seconds

Filtek Supreme Ultra Universal restorative was chosen for its easy handling and range of shades that allow the use of the multi-layer technique to cover and camouflage the decalcification. The first layer of Filtek Supreme Ultra Universal restorative in dentin shade A3D was applied to the deepest portions, replacing natural dentin. In addition, it was placed in the interproximal areas to keep decalcified areas from showing through (Figure 5). This was followed by the application of a higher-chroma body shade, A2B, to the deeper affected dentin portions to mask the darker color (Figure 6). A layer of enamel shade A1E was then placed to create the final form of the tooth, leaving room for the final layer of translucent clear material. Kolor+ Plus® (Kerr Corporation, www.kerrdental.com) tinting was then placed to mimic decalcification over the enamel shade surface. To achieve the desired esthetics, white opaque was used at full strength and diluted to half with clear material to vary the opacities. The final layer of enamel was spread over the surface with the aid of a lubricated sable brush, taking care not to trap voids beneath the material (Figure 7). Ultradent’s Composite Wetting Resin (www.ultradent.com) was then used to spread the outer layer evenly and sculpt to final form. 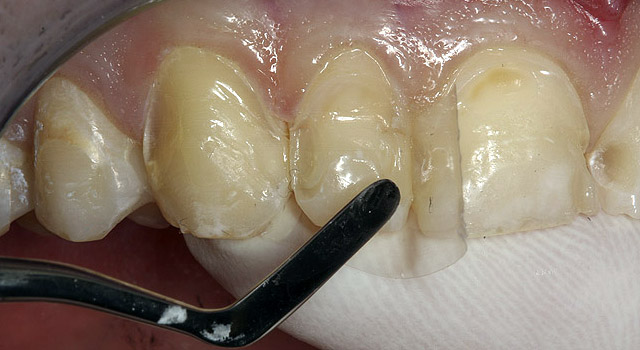 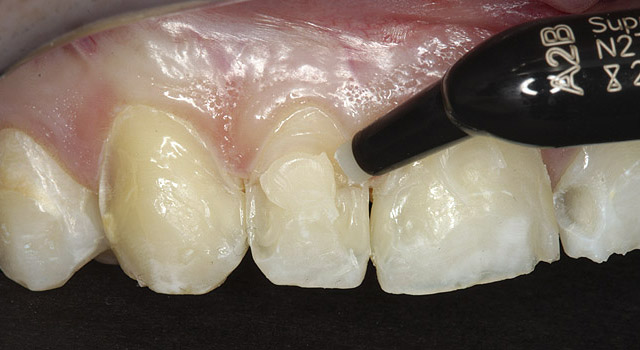 Figure 6. Application of the higher-chroma base shade A2B prevented the darker color of the affected dentin from showing through

Figure 7. A final layer of enamel is spread over the surface

3M™ ESPE™ Sof-lex™ Finishing and Polishing Discs were used to shape and finish the final restoration (Figure 8) in addition to the use of a 7901 carbide bur to create faceting in the smooth surface to mimic the natural light reflection of the tooth structure. The final polish was accomplished with progressively finer Sof-lex finishing discs, an Ultradent Jiffy Brush, Ultradent Composite Polishing paste, and a sable wheel (Figure 9). 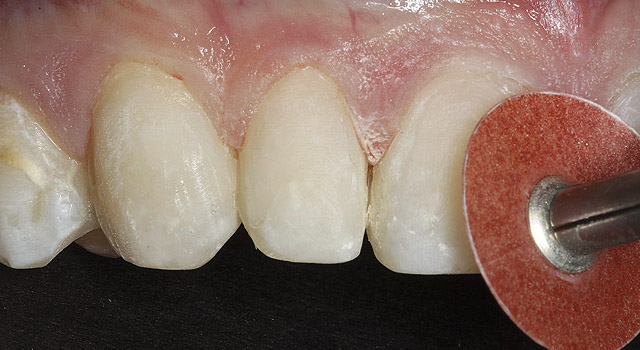 Figure 8. Sof-lex finishing and polishing discs were used to shape and finish the restoration 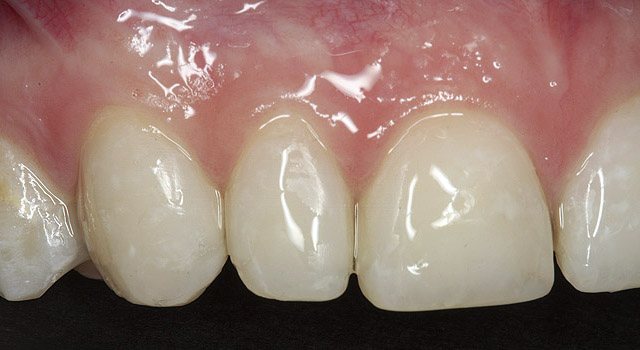 Figure 9. The final restoration at the 1-week follow-up

Because this anterior case demanded a highly specific technique to achieve the desired esthetics, it was necessary to employ an adhesive that allowed for successful implementation of the multi-layer technique. With the presence of both dentin and enamel surfaces, preferential etching was essential to ensure clinical success and low postoperative sensitivity. The benefit of using Scotchbond Universal adhesive came from the ability to have just one adhesive on hand and know that it would perform in whatever capacity was needed, especially with the highly sensitive adhesive technique used. Additionally, because of the adhesive’s universal nature, had any etchant reached the dentin, the clinician was assured that a high bond strength would still be achieved. Using Scotchbond Universal adhesive simplified the procedure while still producing the results previously obtained with other adhesive systems.

The combination of a simplified adhesive procedure and ability to use the composite material in a more technical application allowed the clinician to obtain a highly esthetic restoration while maintaining as much tooth structure as possible. With the use of Filtek Supreme Ultra Universal restorative and Scotchbond Universal adhesive, the restoration can be expected to age well with the young patient, offering virtually no postoperative sensitivity and withstanding wear over many years to come.