Article published in the journal Inside Dentistry | May 2012, Volume 8, Issue 5

Technology: There are currently four proven systems offering intraoral digital impression capabilities, all of which produce an augmented versus a virtual reality image.

Just as the osseointegrated dental implant forever changed dentistry nearly a generation ago, digital dentistry is changing the profession today. Diagnosis, treatment planning, treatment, and the laboratory technical phases are all being reshaped by the many aspects of digital CAD/CAM dentistry as more and more dentists adopt this methodology. Some of the more progressive dental schools are educating their dental students in CAD/CAM, and these new dentists will not know the existence of dentistry without it.

The ability to capture an accurate digital record of the visible intraoral hard- and soft-tissue components without the use of a labor-intensive elastomeric impression material is a “game changer.” The elimination of often multiple unpleasant impressions for patients removes one of the most odious and error-prone experiences of the dental visit. Research has concluded that approximately one third of dentists retake impressions three or more times per month (research provided by Consilium Associates, Irvine, CA, for Cadent, Inc., Carlstadt, NJ, 2008). Additionally, one third of dentists reappoint the patient for this corrective procedure. Digital impressioning enables both the dentist and patient to avoid this loss of time and money.

There are currently four proven systems offering intraoral digital impression capabilities, all of which produce an augmented versus a virtual reality image. In an augmented image, the virtual and real worlds are combined. The user does not wait for an impression cast in dental stone to set, but instead has an instant 3-dimensional (3-D) replica available as soon as the recording is completed (Figure 1). These four systems are 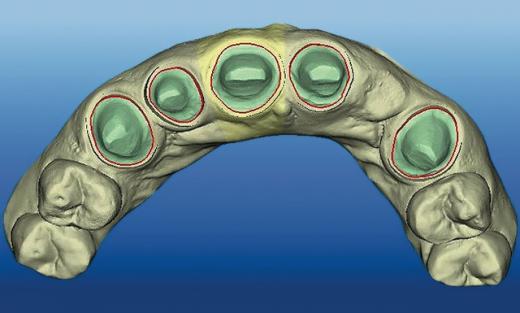 Figure 1. With intraoral digital impressioning there is no waiting for an impression cast in dental stone to set, but instead a 3-D replica is instantly available. In this image, an iTero digital impression scan shows margins identified in red and shaded areas on preparations, indicating no undercuts.

While each distinctly unique, both the Lava C.O.S. and iTero digital scanners—upon which this article will focus—produce an augmented versus a virtual reality image. Both capture the visible tooth and tissue structures in detail that surpasses or equals elastomeric impression materials. Both systems allow the user to transmit the data file via e-mail in an STL format for fabrication of accurate, articulated CNC 5 axis milled or stereolithography (SLA) plastic polymer casts to fabricate dental restorations. (STL is an interchange file format used for rapid prototyping technology to produce 3-D parts; it is used to save CAD files in a standard format that can be read by multiple CAD applications.) Both require a case fee for data transmittal and working model assembly. Single-unit, multiple-unit, complete-coverage, and partial-coverage restorations as well as inlays may be made from the data with either system. The purchase price of the Lava C.O.S. and iTero scanners is similar. Dentists and dental auxiliary can easily learn to use these digital scanners in 1 to 2 days of in-office, manufacturer-guided training included with the equipment purchase. Compared to elastomeric impression materials, which, according to a recent personal communication with Gordon J. Christensen, DDS, MSD, PhD, are estimated to cost as much as $40 per full arch, digital scanning results in less expense for the dentist due to a more efficient workflow and less material usage. Consider that when making an intraoral digital impression on a patient the dentist avoids the need for an impression tray, tray adhesive, alginate, elastomeric impression materials, impression material disinfection, and occlusal registration material.1 Toxic fumes are avoided, and there is no waiting for materials to set while a staff member secures the tray in position.

No mixing and pouring of dental stone into the impressions is needed, and any worry about bubbles forming in the stone cast is avoided. Savings are also realized by a reduced amount of packaging and associated shipping costs. The dentist eliminates the model base and die assembly, margin trimming, and articulation.2

The Lava C.O.S. consists of a lightweight handpiece wand connected via a flexible cable to a CPU cart supporting a flat touchscreen monitor. The optical system contained in the wand is made up of multiple lenses and blue LED cells. The 3D-in-Motion technology obtains approximately 2,400 3-D data sets per arch in a video sequence and models the data in real-time.3

With the Lava software, users instantly see on the monitor what they recorded and have the ability to edit erroneous data with the software’s Smart Scan feature. The Occlusal Reduction Tool feature of the software helps dentists evaluate tooth preparation occlusal reduction. The scanning procedure can be completed in 2 to 5 minutes depending on the operator’s level of expertise, patient anatomy, patient compliance, and whether the scan target is a full arch or quadrant. This optical system requires that the teeth be completely coated with a thin layer of titanium oxide in a dry field while the positioned wand lens glides above them. There can be no contact with the powdered teeth, as this could result in powder residue being deposited on the wand lens, thus damaging the imaged data. The preparation finish line must be visible and not contaminated with blood or rotary instrumentation debris, nor should there be any overlaying crevicular soft tissue at the gingival crest.

Since the image modeling is a real-time video sequence, editing is simplified with Lava™ Design 4.0 software, and the user can immediately evaluate and decide to rewind and scan more data if necessary. The preparation arch, opposing arch, and a lateral view of these arches in a position of maximum intercuspation must all be scanned to complete the file for the software program. The touchscreen feature easily allows all information entry as well as 3600 virtual model manipulation. The margin-marking function allows the user to confirm the preparation finish line boundary with the viewing aid of either a 3-D model or individual photographic clips from the video file (Figure 2) before electronically sending the digital prescription and STL file to the Lava C.O.S. member laboratory. The STL file can be used to produce a plastic polymer die SLA model and opposing arch model through SLA with an accurate articulation. The early versions of STL file data were intended to mill a Lava zirconia substructure. The flexibility of the current Lava C.O.S. software, as well as the Cadent iTero software, allows for the scanning of any tooth preparation finish line design or an implant fixture level, digitally coded scan abutment. 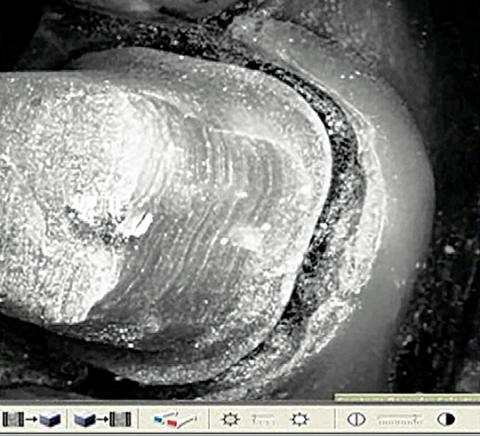 The Cadent iTero 4.0 digital impression system is physically similar to the Lava C.O.S. in that it consists of a handpiece wand attached via a cable to the CPU cart with a flat screen monitor (albeit not a touchscreen monitor). The iTero scanning wand is physically larger and heavier. This is in part because the iTero wand uniquely emits a gentle stream of compressed air to keep the lens surface from fogging. The wand features parallel confocal imaging using laser and optical scanning to capture the surface detail of the intraoral hard- and soft-tissue structures. iTero’s specific parallel confocal scanning captures image data to an accuracy of 15 μm at focal depth intervals of 50 μm. This is a complished with no powder being placed on the highly reflective surfaces characteristically found on enamel, polished or glazed porcelain, ceramic, and metallic restorations.

The technology also allows contact scanning with the disposable wand sheath touching directly against oral tissues, and has the ability to scan subgingivally since there is no risk of powder being smeared on the lens. Simply put, if the operator can see the finish line in a relatively dry field under the tissue, it can be recorded. This technology has proved to be accurate for scanning four- to five-unit fixed partial dentures with multiple pontic spans.4

The sequence of scanning with the iTero is similar to the Lava C.O.S. but the actual step-by-step technique differs. The Lava C.O.S. wand is glided above the surfaces of the powdered teeth in a continuous video-acquiring motion.5 The iTero scan is prompted by a software-generated verbal command instructing the operator to position the wand in an exact location to make a data snapshot. The software then knits together the overlapping snapshots through real-time modeling (RTM) to construct each arch occluded in the maximum intercuspation position (Figure 3). This sequence rapidly forms a real-time image on the monitor in 2 to 5 minutes, as the Lava C.O.S. does. With recently released updated software, RTM allows the operator to selectively erase an undesirable area from the file and rescan the data by section. This editing feature is an enhancement over the previous software wherein the quadrant or arch had to be totally rescanned. The highly defined RTM image enables the user to mark the preparation margin before sending the file to the laboratory. This is a great convenience because it potentially allows the dentist and laboratory to be less dependent on the iTero file reader’s expertise to identify the preparation finish line. 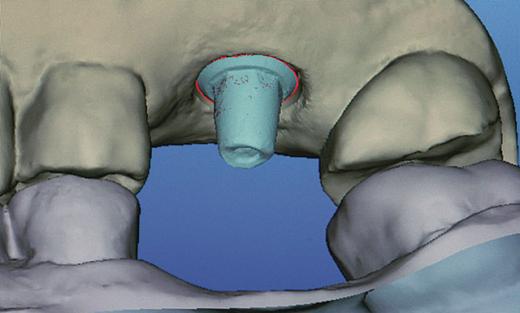 Figure 3. An iTero scan of an implant abutment in articulation.

With the iTero system the dental laboratory making the restoration must pay an acquisition fee for software to view the data image. Similar to Lava C.O.S., there is a case fee for the dentist to have the data processed and for the laboratory to receive the CNC 5 axis milled polyurethane die model. The opposing arches of the milled die models literally snap on to Cadent’s own simple hinge articulators. After four years and hundreds of clinical cases, the author remains impressed with the accuracy and simplicity of this ingenious design.6

The two scanning systems highlighted in this article occupy a unique position in the marketplace as stand-alone systems that produce digital impressions with open architecture transmission of an STL file. Soon, both CEREC and E4D will be releasing versions of their digital impression scanners with updated software packages and open STL file architecture to join the Lava C.O.S. and iTero systems. As consumers, dentists will benefit from this competition as the abundance of technologies will undoubtedly decrease purchase price, reduce the case fee for users, and lead to a simplification of the digital impression scan communication process. This certainly will benefit patients as well and bring dentistry forward into the CAD/CAM generation.